Teppanyaki cooking is popular due to its simplicity and speed. Additionally, it incorporates the cook as an integral part of the dining process, rather than relegating them to the kitchen or grill.

Our Japanese-Style Teppanyaki Grill Hotplate is a versatile addition to any kitchen, and can be used for breakfast, lunch and dinner! 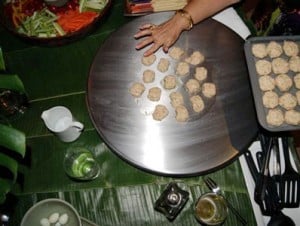 Shallow Dip Technology creates a shallow cooking area for marinades and juices by subtly lowering the centre of the surface whilst the grill is on. It also features a state-of-the-art electric heating element that takes less than three minutes to heat up whilst being safe for both indoor and outdoor use.

The key to teppanyaki cooking is that it is quick and simple and incorporates the cook as an integral part of the dining process, rather than relegating him or her to the kitchen or the grill.

One of the essential features of teppanyaki cooking is the entertaining way the food is cooked and served to waiting diners – very relaxing, yet stimulating. Seeing the fresh food, watching someone cooking – or interacting in the process – and smelling the delicious aromas is a sure thing to whet everyone’s appetite.

Naturally, at home there is no grand performance like in a restaurant. However, this sociable style of cooking does afford the host/cook with the opportunity to show off their cooking skills and knowledge of ingredients.

The word teppanyaki derives from “teppan”, which originally means “iron plate”, while “yaki” translates to “grilling”. Today teppanyaki-style cooking can be performed on an electric stainless steel flattop grill, which can be used both indoor & outdoors.

The food is being cooked where it is to be eaten. The diners are involved in the process by their presence and interaction, making the meal a very convivial experience. Teppanyaki-style cooking can easily be adapted to the Western style of barbecuing or grilling and is a tasty alternative for those who are seeking a change from traditionally prepared steaks and sausages.

Most of the preparation of a teppanyaki meal is done beforehand, and the cooking begins when all the company is seated around the table. Then the sampling of small amounts of tasty delights starts, as they are cooked and served. Many believe that it is even more fun to eat straight from the teppan.

The Cook-N-Dine teppanyaki plus cooktop, or teppan, is a very versatile piece of equipment that can be used to cook a wide variety of other dishes as well, like breakfast, vegetables and dessert, or e.g. Okonomiyaki, a savory pancake, sometimes even called Japanese Pizza.

In Japan it is usual for food to be served in a series of smaller, separate portions, sometimes not much more than a mouthful that can be savoured to the fullest. The most common side dishes are steamed or fried rice, salads, condiments and miso soup.

All of our products are backed by a five year manufacturers warranty (12 months for electronic components) in addition to our Australia wide usage and installation support.

Imagine what you can do! Reinvent cooking and entertaining with our Japanese-Style Teppanyaki Grill.