Why Ultradine Teppanyaki Plus is the Superior Grill

There are many different types of teppanyaki machines and with so many on the market making that final decision can be next to impossible. Here at Cook N Dine we obviously think our Ultradine Teppanyaki Plus range is the superior product but what is it that makes them superior? We’ve compiled a list of the most popular teppanyaki grill styles to show you why the Ultradine is at the top! 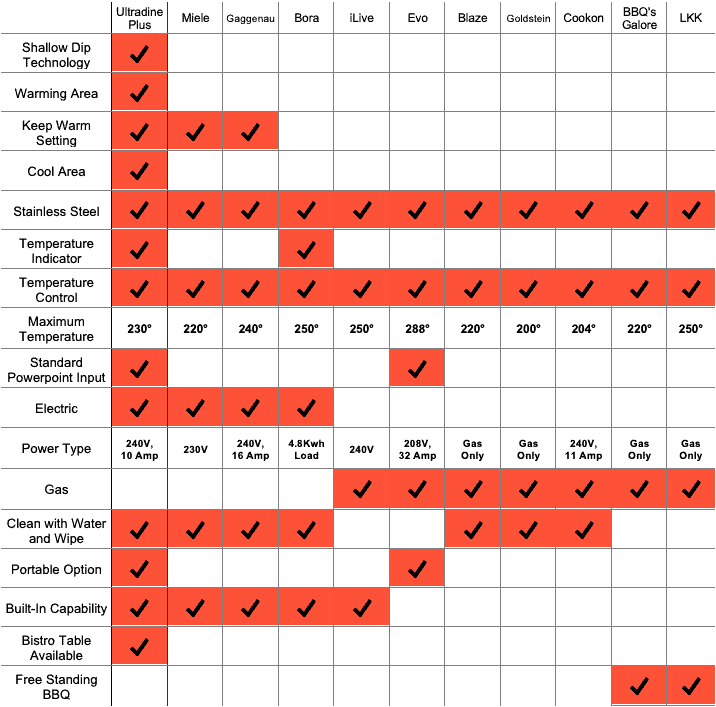 Grills like the Bora, Miele and Vario boast accurate and specific temperature control as some of their core features. While this is beneficial, when cooking, most foods can be cooked well at varying heats and do not necessarily need to be at an exact temperature. The Ultradine lets you cook at whatever temperature you like. It also has several advantages over these styles of electric plate grills – first and foremost, the shallow dip technology of the Ultradine Plus. Almost none of the leading teppanyaki grill brands offer this revolutionary technology. The shallow dip in the centre of the grill can drastically improve the convenience and ease at which you can cook.

The Ultradine Plus also has three areas that heat differently with the outer area being always cool to the touch. This makes it much better for serving food and having guests over at mealtime. The Bora, Miele and Vario grills only have two heating areas without a warming area and if you wish to use both sides the entire grill will get hot rather than just the centre area.

There are several grill units on the market that function more like traditional stoves, like the iLive Natural Gas Cooktop. They run on gas rather than being electric like the Ultradine and must be built-in to your kitchen which leaves no opportunity for portability. They also force you to cook a bit differently as they often have compartments for pots and pans like a regular gas stove would. The flat teppanyaki area is typically much smaller and has no Shallow Dip technology. There is never a cold outer area for storage and serving either.

Some teppanyaki grills come in more of a traditional grill style. These are usually gas rather than electric. They are still portable to a degree but having to attach gas limits where the grills can go. Evo, Blaze and Goldstein teppanyaki grills all work via gas, which makes it hard to move them around. Due to their shape and size, it can often be awkward to serve food directly from them, especially since they need to be hooked up to gas. These grills don’t allow as much opportunity for the units to be put on the table and eaten directly from like can be done with the Ultradine Plus Portables and Table Grills.

There are even larger teppanyaki BBQs that come free-standing. These are made for use outdoors and like the BBQs Galore and LKK ranges are usually run on gas. The Ultradine Plus range is superior just in terms of how much space it takes up. Our Cook n Dine grills are slim enough to integrate with the kitchen counter or to sit comfortably on top. And while these free-standing barbeques do offer some cool areas for food storage there is no Shallow Dip technology like with the Ultradine Plus. These kinds of grills are better suited to restaurants and commercial applications as they cook large volumes of food.

Book a call with one of our team members by entering your phone number in the form below.

For any other enquiries regarding our products please fill out the form below and we will be back in contact to answer any of your questions.

Fill in the form below and we’ll send you our catalogue.